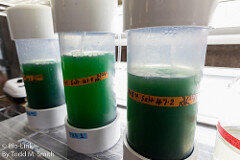 Biotech companies use a variety of cell types when it comes to manufacturing proteins and other chemicals. Yeast were the first microbes to be employed for manufacturing desirable products.  In the 1940's, industrial microbiologists started using bacteria like Streptomyces as factories to make antibiotics.  Later, when techniques for cloning DNA and creating monoclonal antibodies were invented, the types of cellular factories expanded to include E. coli, mammalian cells, and even cells from insects.

Now, a new organism has joined the biotechnology tool-set – micro-algae.

What can you make from algae?

Micro-algae and their larger cousins (kelp) have become promising crops for agriculture and biotechnology.  They are being used to clean water, make plastics, flavor your dinner, and make proteins normally found in human milk.   Algae have also been harnessed to produce omega-3 oils, vitamins, minerals and protein for use in foods and beverages, such as nutrition bars, cereals, yogurts, juices, energy drinks and more.

If we visit Biotech-Careers.org, we can find US employers that list algae as a component of their technology.  According to their business descriptions, they make nutritional supplements, biofuels, oils, ink, fabric, plastic, vaccines, and enzymes.  Some are involved in water treatment.

Some of the most interesting algae companies are also involved in synthetic biology.  I found a company called Algiknit that's working on making textiles and yarn from kelp.  Another intriguing company is Living Ink.  Living Ink is making color pigments from algae with the goal of providing alternatives to producing dyes from toxic petroleum products.

To prepare biotech students for these new opportunities in algae biotech, the Algae Biomass Foundation started the Algae Technology Education Consortium (ATEC).  ATEC surveyed employers to determine the types of algae-related jobs and the approximate demand in the next five years.  They estimated the number of jobs in algae cultivation, harvesting & processing; algae biomanufacturing and fermentation, and algal biotechnology would grow about 10 fold in between 2016 and 2021.

Recently, ATEC launched an Introduction to Algae MOOC through the University of San Diego and Coursera.  If you prefer hands-on learning, two InnovATEBIO community colleges are also offering courses related to algae.  Santa Fe Community College in New Mexico has algae cultivation and biotechnology programs that allow students to obtain certificates in Biofuels or Algae Cultivation and/or an Associate in Applied Science in Controlled Environment Agriculture. Austin Community College is using algae in multiple courses.